Save the Daylight- When Did Daylight Saving Time Start

Save the Daylight- When Did Daylight Saving Time Start

How and When Did Daylight Saving Time Start?

It’s that time of the year to turn the clocks back to end Daylight Saving Time.

Of course you’ll remember to turn your clocks back when you go to bed Saturday night, but do you know why–beside for the obvious reasons that you want to be in sync with the rest of the country?

My brother sent me a great book a few years ago titled “Seieze The Daylight” by David Prerau that explained the whole reason we have a Daylight Saving period and how it originated. Below, you’ll find a brief synopsis of his book.

For example, did you know that one of the more staunch advocates for when to end Daylight Saving Time is the candy industry? They rely heavily on the sale of candy near Halloween. Over the years they have lobbied heavily to end Daylight Saving Time after Halloween so that their customers would enjoy an additional hour of trick-or-treating. Looks like they finally won.

Ben Franklin-of “early to bed and early to rise” fame-was apparently the first person to suggest the concept of daylight savings, according to computer scientist David Prerau, author of the book Seize the Daylight: The Curious and Contentious Story of Daylight Saving Time. 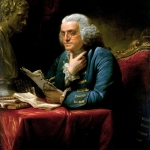 While serving as U.S. ambassador to France in Paris, Franklin wrote of being awakened at 6 a.m. and realizing, to his surprise, that the sun would rise far earlier than he usually did. Imagine the resources that might be saved if he and others rose before noon and burned less midnight oil, Franklin, tongue half in cheek, wrote to a newspaper.

“Franklin seriously realized it would be beneficial to make better use of daylight but he didn’t really know how to implement it,” Prerau said.

It wasn’t until World War I that daylight savings were realized on a grand scale. Germany was the first state to adopt the time changes, to reduce artificial lighting and thereby save coal for the war effort. Friends and foes soon followed suit.

In the U.S. a federal law standardized the yearly start and end of daylight saving time in 1918-for the states that chose to observe it.

But there was also a real need for standardized time too. Prior to public train transportation, people traveled very slowly from point to point. Once they arrived in a town they would reset their watch to whatever time the local town square clock tower read. Once transportation by train became prevalent, people would find themselves in perhaps more than one time zone in a day and people waiting for a train needed to know that everyone was on the same relative time.

During World War II the U.S. made daylight saving time mandatory for the whole country, as a way to save wartime resources. Between February 9, 1942, and September 30, 1945, the government took it a step further. During this period daylight saving time was observed year-round, essentially making it the new standard time, if only for a few years.

Since the end of World War II, though, daylight saving time has always been optional for U.S. states. But its beginning and end have shifted-and occasionally disappeared.

During the 1973-74 Arab oil embargo, the U.S. once again extended daylight saving time through the winter, resulting in a one percent decrease in the country’s electrical load, according to federal studies cited by Prerau.

But does daylight saving time really save any energy?