How Can You Tell When The Housing Market Has Changed?

You look at the numbers.

Agents are a funny lot. Their perspective of the housing market around them has a lot to do with how busy they are at the moment—how many listings they have (or don’t) or how many times they’ve recently been beat in a multiple offer situation.

On broker tour day where we try and see all of the new listings in one fell swoop and we can’t help but bump in to our colleagues during tour. Actually a lot of important networking goes on during our tour, but along with the hope of discovering a “coming soon” treasure, is the hyperbole about the state of the market. It varies dramatically from agent to agent and house to house as we make our way up and down the peninsula.

When an agent’s listing lingers on the market too long they often blame it on “a slowdown in the market”, rather than try and figure out if they did something wrong or the seller overpriced their home. And of course if one of their listings recently flew off the shelf, a slowdown in the farthest thing from their mind.

And when seasonal fluctuations, which are otherwise easily predictable take hold, many agents are in a tizzy that the market has finally topped (or bottomed) out.

When we hear this wild conjecture it’s in at least my nature to go back and do some research to see what the real pulse is of the market.

So here’s how the patient was doing at the end of May 2014 for Belmont: 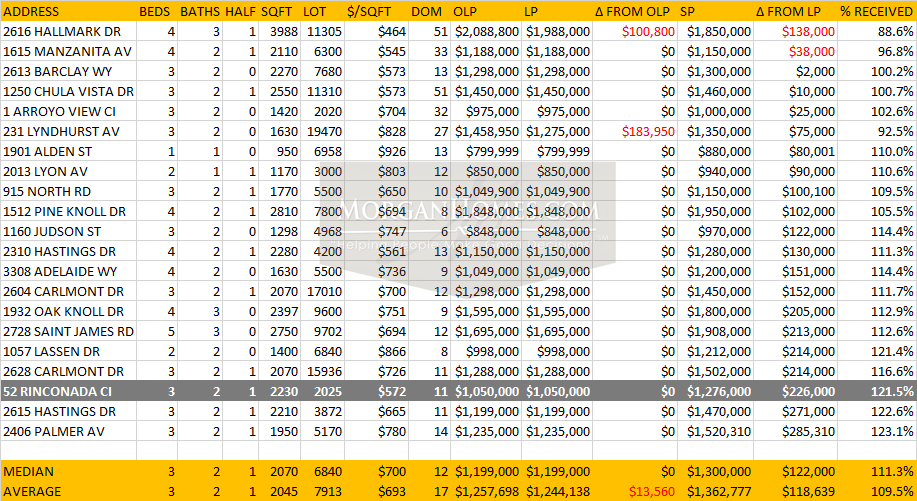 The number of homes which sold in Belmont during May of 2014 were 19—down from 32 a year ago. So what happened? Well as it turns out May of 2013 was one crazy anomaly as also seen in 2010. Homes sales in Belmont have averaged 24 sales per the month of May since 1998. But in our current market, homes sales are down because new listings are down, not because people are afraid to buy a home. 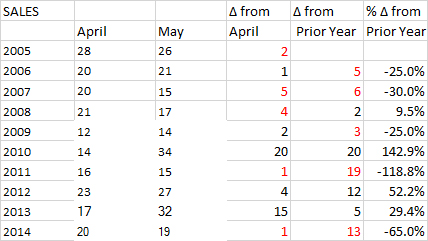 While the number of new listings dropped from 35 last May to 31 this year, the 16-year average is 37 new listing per month in May. 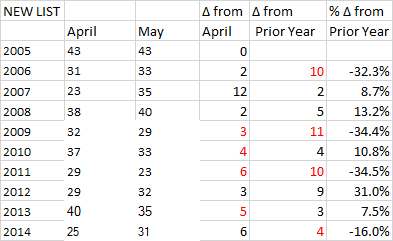 This unremarkable statistic remained essentially unchanged at 11 days in May of 2013 to 12 days in 2014.

The Median home price in Belmont for May 2014 was $1,300,000 which bought one a median size 2,070 Sqft home. This May saw an increase over 2013 of 17% [raw numbers]. Of course the homes which sold this year were 8.6% larger so the real median home price increase was probably closer to 8.4% year-over-year. And if you use the actual square foot calculation model for adjustment that whacks it down even further to a 7.6 realized increase year-over-year. So the rate of home price increases appear to be slowing. 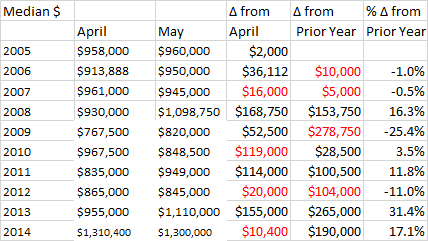 Only two sellers had to lower their price before their home sold which is exactly twice as many as last year.

Percent Received of Asking is probably the statistic most aligned with defining a hot or cold market so we track this number closely—though there’s one inherent flaw in reading too much into this and the median home price changes. Here’s why…

As prices increase fewer and fewer people have the wherewithal to purchase a home at all, let alone throw an extra $100,000 over the asking price.  Couple that with the recent housing rebound out of a historic slump, and one can see that in the initial rebound years, the median price trend skyrocketed along with the percent seller’s received over asking until the home values breached new high territory. Hence we end up with statistics demonstrating the rate of appreciation slowing and the amount buyers can afford to go over asking waning. In all respects one could call that a slowdown, but being hit by a train going 50 mph rather than 100 still smarts. 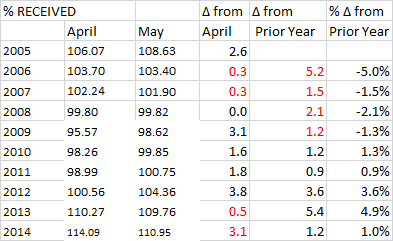 How the Numbers Rolled