When is the Best Time to Sell My Home?

When is the Best Time to Sell My Home?

When is the best time to sell my home is perhaps one of the top five questions we are frequently asked. On my desk I have a crystal ball—literally. And often when I am asked to venture a guesstimate as to how the real estate market will perform, I simply stare down at the glass orb until my clients’ eyes follow mine to my point of fixation, and they realize their question was really impossible for me to answer with any certainty.

If you’re read our blog page, you know I love to look at the numbers—how much have homes have gone up, what percent sellers are receiving of asking, etc.

These numbers don’t really tell me what will happen—they’re historical numbers so they only tell me what did happen. But before we get started, no decent look at the market would be worth anything if we didn’t first explain our thought process and methodology.

In assigning probabilities, there are two common to employ. Frequency based probabilities, which rely and past data points to lend credibility to predicting a future event, and subjective probabilities based upon our belief that something will or will not occur.

Of course the belief or subjective probability approach at first glance appears just as the name infers—that it’s too subjective. However it’s actually quite important, and you probably use this approach more often than you do frequency based analysis when conducting your day-to-day assessment of say, whether or not you think the price of gas will be lower next week to decide if you want to wait to fill up then.

What about when we use both approaches, or aren’t sure which one is more appropriate for a given situation? Refinancing your home is a good example. Today’s question might be, “Will rates go lower than they are today, or will they soon rise to more historical levels?”. Here we might use frequency based analysis to look at the historical trend of mortgage rates and see where they are today in relation to average historical rates. Seeing how they are near the bottom of where rates have been over the last 30 years, one might conclude that they have nowhere to go but up, yet once again they dropped this October even after the Fed’s all but promised a rate hike—because things change.

One of the problems inherent in using only frequency based analysis is that there’s a trade-off between accuracy of the information (having enough data points) and relevancy (how old is the data). Going back further and plotting more data points is certainly going to give us more information to evaluate, but the relevancy begins to drop off as we got too far back in time, when say our economy was in a different state— pre-internet for example. 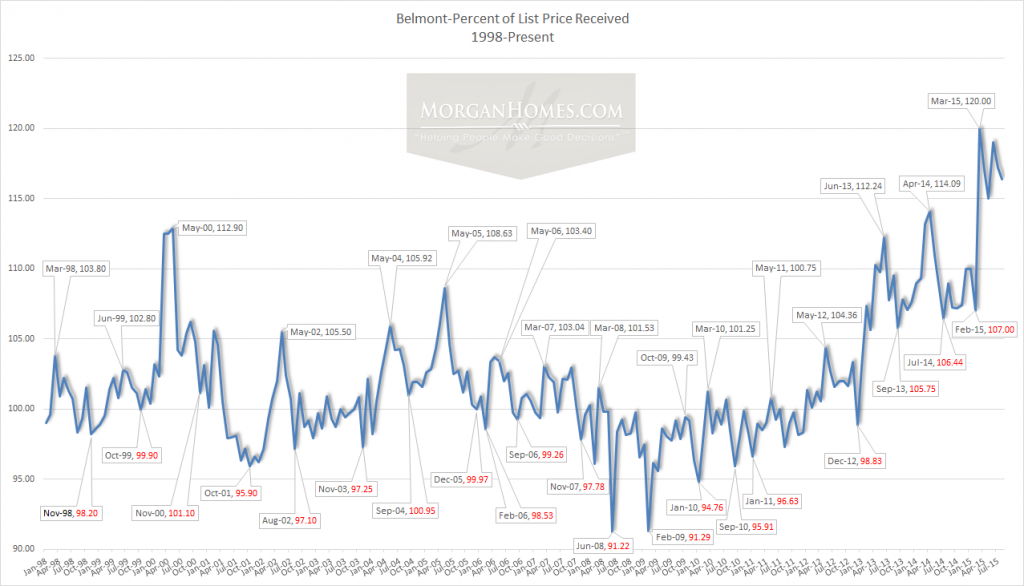 These are the percentages of frequency in occurrence where each one has an 8.3% (1/12) equal chance of homes selling either over or under the asking price in a given month. 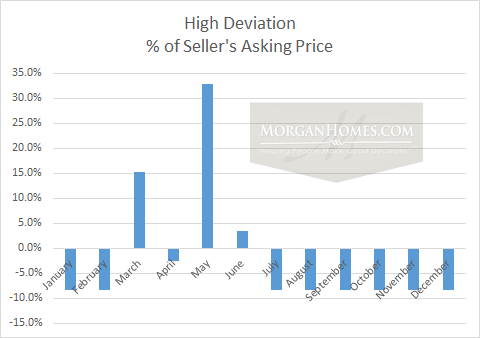 May is a clear winner as to when reported sales of homes showed that sellers obtained the highest percent over their asking price—statistically. Since most of May’s homes probably sold in April, it’s more likely that the sale actually was consummated in April with a typical 30 day list to close time frame.

The problem with probabilities based solely upon past performance is that things can change quickly. Governments can topple or be overthrown sending the world into economic panic, external natural effects such as tornados, tidal waves, droughts, El Nino events, etc. can all contribute to altering selling and buying patterns. For example, October never shows up as a month where the least amount a seller received occurred, except for in 2001, after the September 11th terrorist’s attacks.

Also interesting to note is that if one breaks down this graph into pre-Deep Recession and Post Recovery periods there’s much less of a clear distinction as to which month is consistently a winner—or loser. An important and fair distinction should also be made in relying solely upon the percent a seller receives of asking as a definitive demarcation as to when selling your home is optimal. Sellers could be pricing their homes lower in the spring than they do later in the year, when new higher price levels have already been achieved. So measuring how much the seller received in real dollars is actually more important, but doing so involves tracking the median price trend which is easily influenced by relatively small market samples when larger or smaller homes sell in a given month. Tracking the price per square foot per month would help add more information into the mix, but that is susceptible to errors when homes with larger or smaller lots are involved.

And to throw the final wrench into the works, one must remember that during these 17 years there have been two recessions, and a lot of variance of interest rates and various government stimulus packages which have influenced people’s personal behaviors one month over another, not to mention El Nino’s and droughts which also have affected buying and selling patterns.

We hope this has helped further the cause of trying to turn the uncertainty of when to sell your home into a measurable risk. But remember, as Mark Twain is attributed to having once said, “History doesn’t repeat itself, but it does rhyme”.