In the summer of 2007 our preferred lender Steve Herbert from the now defunct Washington Mutual called for an emergency meeting in our Belmont office. His agenda, the sky was about to fall on the lending industry. Of course what followed was the collapse of dozens of financial institutions and decline in the housing industry not seen since the great depression.

Lending standards were tightened during this three year downturn and money was lent to only AAA clients. Credit was hard to come by and loans such as stated income for self-employed people were nowhere to be had.

Fast forward seven years and in our meeting today, Steve Herbert stood in front of our group of three offices and announced that the lending standards have been significantly reduced.

Fisher Investments foretold this turnaround over a month ago in our meeting in Woodside with their Financial Investment Group.

We’re seeing it every day—new offers from banks wanting to lend their money with generous programs to help people with less than 20% down, self-employed, or less than stellar credit scores.

What does this mean for you?

If you are considering buying a home the good news is credit will be easier to get—finally. The bad news is that will increase the number of buyers who can qualify for a loan—increasing your competition. This will invariably put even more upward pressure on prices. Just when we thought the rate of appreciation might begin to wane, looser lending standards are tantamount to adding fuel to the fire of home values.

Putting your home search on hold in fear that values are unsustainable may be a fool’s game as less strict lending standards just prolonged the recovery before any market downturn.

We’re into the housing recovery for two years now and we expect that when a correction does occur—and if history repeats itself the cycle will—price declines may only wipe out the last several years of increases. Perhaps five or seven years from now as prices continue to have climbed to new highs will they begin to drop. Based upon past real estate boom and bust cycles, we doubt they will drop back to today’s prices.

This graph illustrates San Mateo County Home Price Trend vs. the City of Belmont. Notice home values are more volatile when viewing a wide swath such as San Mateo County with its dramatically varying cities including Atherton and Daly City. Belmont on the other hand was more insulated during the downturn than the SMC index. Belmont home prices essentially dropping in 2009 to lows equivalent of those of five years previous but within several months after the low in 2009 they had recovered to levels seen in 2006 and by October of 2013 they has eclipsed their previous high in 2008. 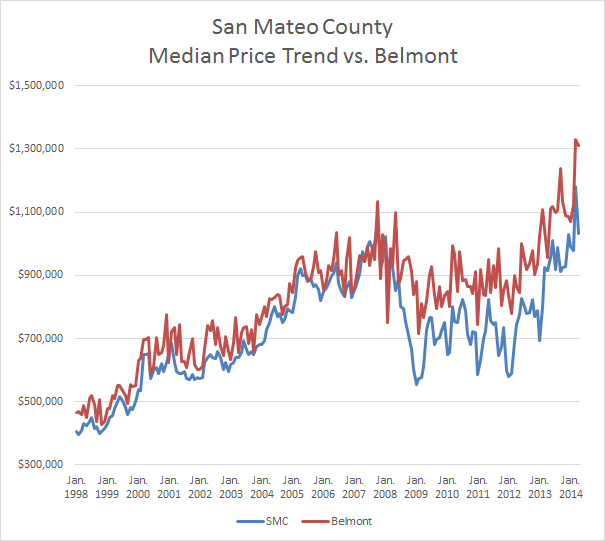 Of course while we will benefit both personally and professionally as will many of our clients from these more broad lending standards, we could have managed at the current levels which would in all likelihood result in a more stable housing industry and helped avoid more bubbles like we saw in the last decade. And while some specific regulations will help restrict similar dire consequences from occurring, there are others (sub-prime mortgages for example) that will once again allow those who perhaps should not yet own a home to get one–and lapse back into trouble–we’ll see.