Which City Is More Affordable–Belmont or San Carlos

Which City Is More Affordable–Belmont or San Carlos

NOTE: This post is in response you a question posed on the Belmont Patch:

Q.    How does Belmont’s property prices rise compare with nearby San Carlos’ which has the Laurel Street downtown and the industrial area?

A.  To answer this question as posted on the Patch by Gladwyn d’Souza, we had to do compare home sales and price points in Belmont to San Carlos over a period of time to see if any trend appeared.

We chose 2006-2013, which effectively covers the period right before and through our local housing recession and into the recovery.

We’ve spent a week looking at the numbers and trying as best we could to put them into a comprehensive perspective without analysis paralysis setting in.

The short answer is Belmont is lagging the home price appreciation of San Carlos. But there’s a lot more to it than that. If I’m reading into the question correctly, (since we received more than one request for this analysis) essentially people want to find out if having an industrial and downtown area creates more value in the local housing market and if that influences the rate at which homes appreciate—which is a slightly different question than just trying to answer if homes near a downtown cost more—this question includes do homes go up in value at a faster rate than surrounding areas. If I am paraphrasing that incorrectly, I apologize.

Unfortunately, the Patch limits how long we our response to a post can be so we are including this link to our own blog page where we can give the answer justice as well as add the appropriate graphs and documentation. We invite you to join us here for our in-depth answer.

We need not involve Belmont for this part of the analysis—not yet. That actually serves to complicate the answer because first we need to know if the homes near downtown San Carlos are indeed going up at a faster rate than homes which are not near downtown. This methodology eliminates  unnecessary variables created by comparing two cities which could unjustly influence the results—issue such as weather, governance, schools, transportation, shopping, etcetera—to name a few.

Our Multiple Listing Service allows us to break down sales by rather arbitrary but effective boundaries. For example we can look at the White Oaks area in San Carlos and compare it to the homes just north of Holly on the Belmont border, or homes which are more sequestered in the San Carlos hills on Crestview.

As one can see the raw rate of median home price appreciation is considerably higher in the White Oaks than in the San Carlos Hills. And when we compare the price per square foot we arrive at the same conclusion—that homes near downtown in San Carlos coast more per square foot and are going up at a faster rate. However, the adjusted rate takes into consideration the variation in the size of homes selling in these two areas. We factored that in as best we could—admittedly it’s not a perfect system but, for example, in the White Oaks on 2013 we surmised that if the raw rate of appreciation was 42.3% over the prior year, but the homes were 15.4% larger, then we are not comparing apples to apples. So to be consistent we subtracted this variance from the rate of appreciation for an “adjusted rate”. Normalizing these two variables offers up a much more stable rate of appreciation and probably closer to the actual difference in these two areas—which isn’t much.

Clearly it appears that people are willing to pay more to be closer to a downtown as is evidenced in the Bel-Carlos map below illustrating the price per square foot people are willing to pay. Does that fully answer the question of are homes near downtown selling for more—or appreciating at a higher rate? Certainly not. The reason is complex and two-fold. First, homes in areas which were harder hit by the housing market collapse are enjoying a higher rate of appreciation—counterintuitive perhaps to their respective locations—because they have a greater distance to rebound—in other words, the values dropped further and faster in these areas hence they are rebounding at an inverse rate.

Case in point, the Sterling Downs area of Belmont. Known for its superior microclimate weather, this area is home to many original floor plans  which consisted of a 1,010 Sqft three bedroom 1 bath home. At that size, the price point for these homes was less than surrounding larger Belmont homes and much more affordable to the first-time homebuyer—many of the very homeowners who found themselves in financial trouble when the housing market imploded. In Sterling downs in 2011 there were only 10 sales—two of which were distressed sales. Simply put—many could not afford to sell and take a loss in 2011. In 2012 the number of sales shot up to 19 but eight were distressed sales, while in 2013 a whopping 33 sales were logged and only 1 was a distress sale. It’s easy to see with values plummeting more in Sterling Downs than others areas of Belmont it’s no wonder they are bouncing back at a higher rate. And they just happen to be closer to downtown…

The second factor skewing the results is that homes which are smaller sell for less per square foot.

Empirically speaking, we know that people pay a lot of money for very small homes near downtown San Carlos—finding the data to clearly illustrate the phenomenon has proven more difficult.

Now for the bigger question of how does the rate of appreciation in San Carlos compare to that of Belmont’s? 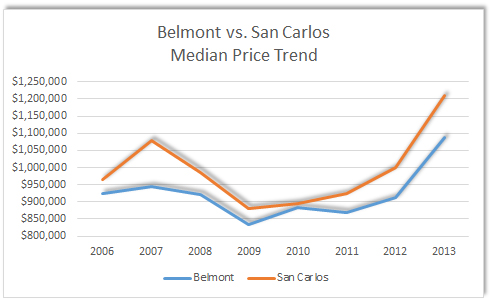 What the numbers illustrate is that San Carlos has a higher median home price than that of its neighbor to the north, Belmont, and as long as we’ve lived here (which is now going on over 21 years) it always has. 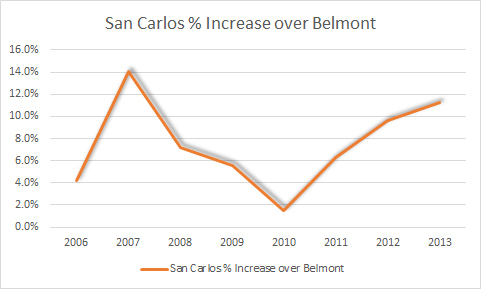 We’ve noticed in both recent market corrections (1989 and 2007), that as the market cools, so does the discrepancy between the two city’s median home price. And when there’s a bull housing market, San Carlos begins to pull away at a higher rate of appreciation. Of course as in nature, a sort of market equilibrium begins to set in when values are too far apart to lessen the disparity in home prices—akin to water filling a void.

Here we see that not only do you pay more to live in San Carlos you also get a smaller home for the money. And since the lot sizes in the two areas are relatively similar, larger lot sizes in one area which could affect values can be ignored.

So it appears that the same home in San Carlos will cost you about 14-16% more–no matter where in San Carlos it is located.  The next question to attempt to answer is why?

What if we removed the artificial borders and created one large new town called Bel-Carlos, for our analysis. Now it’s just one big happy city with various neighborhoods-like it really is. Because last we checked San Carlos and Belmont offered reciprocity to their neighboring cities for access to shopping, restaurants and parks—you name it. Would a person really choose to live in San Carlos and pay more just to enjoy the distinction that their city had a downtown? After all, they could live a few blocks north and get to the same restaurants and stores?

We think that the proximity to the downtown is more attractive than the mere fact that one exists. To illustrate this we see that the values near downtown in San Carlos (price per square foot) are greater than neighborhoods further away—in San Carlos and Belmont. 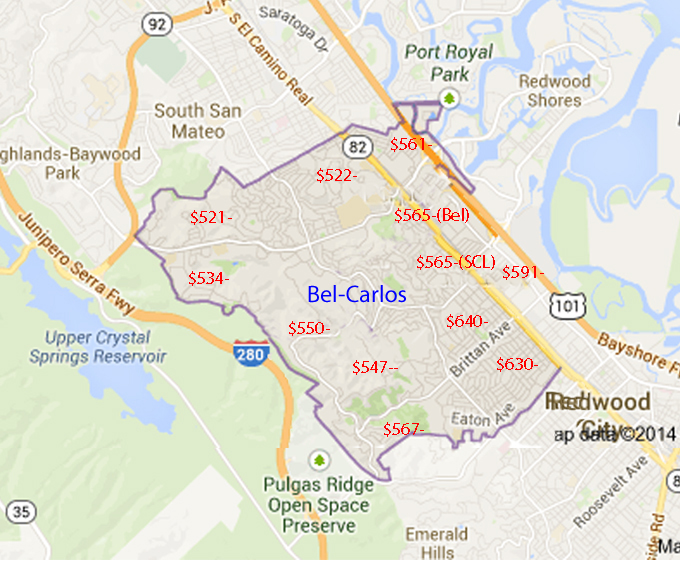 In this map we combined San Carlos and Belmont to create a borderless “Bel-Carlos” and then we used data since 2007 in each area to examine the price per square foot which homes sold for.  In almost each case San Carlos homes cost per square foot exceeded that of Belmont’s in the neighborhoods we examined.

Overall, the home values in San Carlos are higher and go up at a faster rate than those of her neighboring city of Belmont. Is it that San Carlos has a larger downtown with many fine restaurants, the warmer weather, shopping opportunities, community involvement or the city governance? It’s most likely all of the above. That said, there are many who choose Belmont for the beauty of the hills, proximity to major commute arteries, and the cooler mountain air.

Drew & Christine Morgan are REALTORS/NOTARY PUBLIC in Belmont, CA. with more than 20 years experience in helping sellers and buyers in their community. They may be reached at (650) 508.1441 or email at info@morganhomes.com.