Belmont Home Values–Are They Sustainable in 2014?

Belmont Home Values–Are They Sustainable in 2014?

This year-end summary is where we bring you the re-cap for Belmont Home Sales. To say the least, Belmont sellers had a good year. After watching their home values drop for five years in a row (until 2011), they finally enjoyed some relief in 2012 and in 2013 as Belmont home prices reached a new high never seen before.

Here’s how it all stacked up.

This graph shows the median price in Belmont from 2012 through 2013. Many postulate about whether the market has returned to its previous high. To answer that, we looked at the median home trend in Belmont going back to 1998. Belmont’s median home price was over the million dollar mark for every month last year—save March. The closest we came to that was back in 2007 when we hit a period over the million dollar mark only twice. In many areas of the east bay and the country as a whole, they are still shy of the highs seen in 2006. 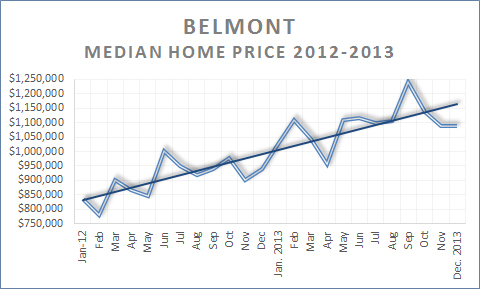 This map show which areas of Belmont increased more year-over-year than others. If this seems odd to you, read the post we did on Which City is More Affordable—Belmont or San Carlos where we discuss some of the idiosyncrasies that have an effect on micro-regional values. 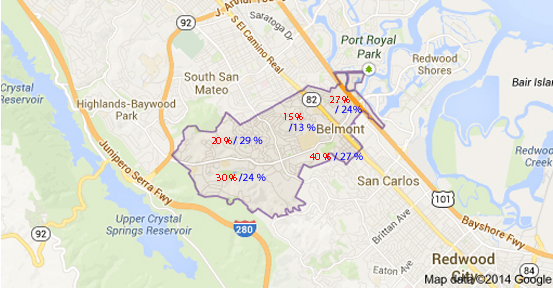 If you’re like us and you are wondering why some areas of Belmont saw so much more appreciation than others, we took another step and looked into the size of homes selling in the respective areas during the two periods to see if that could account for the variance.

The red percent displayed on the map is the raw median price reported by the MLS and the blue percent is an adjusted percentage taking into consideration that either smaller or larger homes sold in the two periods.

These are our findings:

This of course would indicate a raw median home price in Belmont of 26% and an adjusted one of 23.5%–much closer to the numbers reported in aggregate form from the MLS.

The big brouhaha last year was over the lack of inventory. There were only seven fewer homes listed for sale in 2013 but 23 more sales than in 2012. Of course, this created fewer homes for buyers to choose from, which then led to bidding competition and prices going up at exponential rates.

DOM (Days on the Market)

The time it took to sell a home in Belmont last year almost dropped in half from 2012—from 37 to only 21 days.

The “Sizzle Factor”, or “How Hot Is the Market?” reached a new high with the average Belmont home seller receiving 108% of their asking price compared to 102% in 2012.

What can we expect in 2013? Probably more of the same. The median home price rate of appreciation should slow, as many homes which were under market value have regained much of their lost appreciation. We’d take a guess that appreciation will be closer to 14%-16% on average for Belmont—down about 5% from what we will imagine was the height of appreciation increases in 2013—we’ll see.

The factors to watch which could alter this trend will be the waning bond purchases by the FED which will serve to raise interest rates and may take away the ability for buyers to bid so much over the asking price in the latter part of 2014.

This begs the initial question of are these homes values sustainable and the answer is that depends. If the economy continues to improve and the rate of appreciation slows, than the short answer is yes—for now. But recent developments in China’s economy could have an impact on the rate of future appreciation and the U.S. economic rebound. Remember, what started the whole Bay Area recovery was jobs. If that changes, the game we know today could be over very soon.