It’s very hard to stare at numbers that are counterintuitive to what you feel about the market around you. This is the case once again in Belmont when we compare last August to August of 2015.

This August felt really slow—like there was a pull-back in the market. Many of our colleagues are still commenting about how if just feels different—but the numbers say something else.

One can account for the lag between an offer date and closing to explain away part of this nagging feeling, since most of the homes which closed in August were sales consummated in July. August could turn out to be a slow month when we look at September closings next October.

Certainly the stock market vacillation has people on edge and the Federal Reserve’s non-stop droning about interest rate hikes has people feeling uneasy, and when people feel uneasy they tend to pull back or even freeze, absent a clear path through the valley of the unknown.

We’ll summarize this very quickly for you: (click on the picture for a larger image). 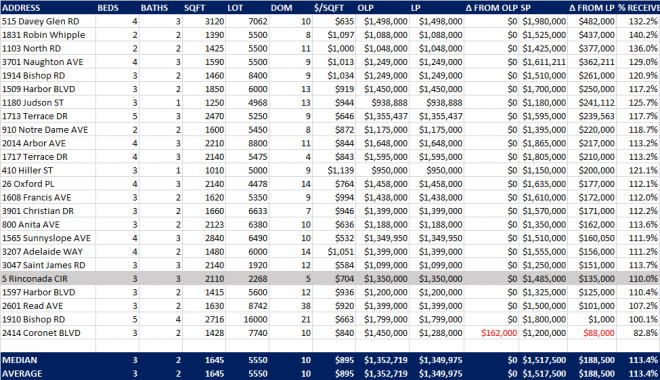 * Rinconada was our sale.

The housing units sold over the two period was a dead tie at 24—so nothing to note there.

However the median size of a home which sold in the two periods was vastly different—as the homes which sold in 2015 were 450 sqft or 21.5% smaller and on lots 12% smaller.

That did nothing to dent the increase in the median home price, which rose another 20% year-over-year despite the homes were 21.5% smaller—that’s noticeable.

We’d expect this to be higher, since smaller homes sell for more per square foot than their larger counterparts—and it was, 35% higher than last year.

Looking at this from a different angle, what if we added the raw 20% year-over-year growth numbers and added to that 21.5% since the homes were that much smaller? We get 42.5% year-over-year.

Could it be that prices in August went up 40+ % year-over-year? No wonder the market feels like it’s slowing down. Home affordability is at its lowest point since the highs of 2009.