Belmont Home Sales – Are We Headed for a Cool Down or Not?

Belmont Home Sales – Are We Headed for a Cool Down or Not?

Like a marathon finish before the New Year, Belmont’s home sales hung in there for at least one more month as October’s home sale statistics showed little signs of distress.

It’s actually amazing for us to see just how strong the market is going into what is typically a seasonal slowdown period.

In order to make any sense of Belmont’s housing statistics, we look at year-over-year numbers rather than month-to-month changes which are often influenced by seasonal factors. 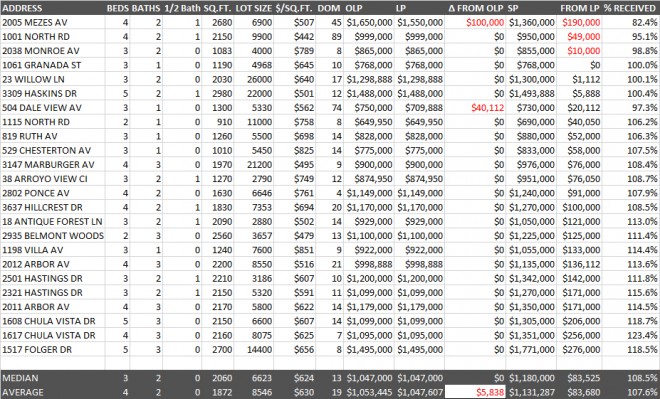 That’s all the buzz with agents complaining daily about no housing inventory.

There are three factors to look at when thinking about the inventory level.

The number of new listings this October went from 14 in 2012 to 17, the number of sales were up this year by one, yet the overall inventory dropped from 32 to 24 this October.

In October of 2013 the number of available homes for sale was 32, while this year that number dropped to only 24. That brought down the “Months of Inventory” statistic which measure the time (in months) that it would take to sell all of the existing homes on the market at the current rate of sales. Nationwide, that number is still around five months of inventory.

Belmont dropped from 1.39 months last October to 1.04 this year.

With sales staying relatively static, and new listings increasing in 2013, why then does the months of inventory counterintuitively shrink rather than grow?

The answer lies in the number of leftover homes from the previous month which linger on the market. Last year the market was strong, but not as hot as this year, so some of the September homes for sale last year managed to spill over into October causing the overall inventory to increase.

So how hot is the market? Just last month we were seeing some signs of a cool fall market but October’s number appear to have staved off the winter housing chill for at least one more month. Could it be the warmer than usual fall we are enjoying? Perhaps. In any case, this October 20 of the homes or 83% sold over the seller’s asking price, while one home sold at asking and only two sold for less.

Last October only 35% of the homes sold over the asking price, two sold at asking and 22% sold for less.