Belmont Home Prices & Sales for March 2013 – Can it Get Any Hotter?

Belmont Home Prices & Sales for March 2013 – Can it Get Any Hotter?

Once again Belmont home sales were strong. Now that we are comparing a bull year in 2013  to 2012, another bull year, the increases seem a bit watered down since in both years thus far home sales have been strong. 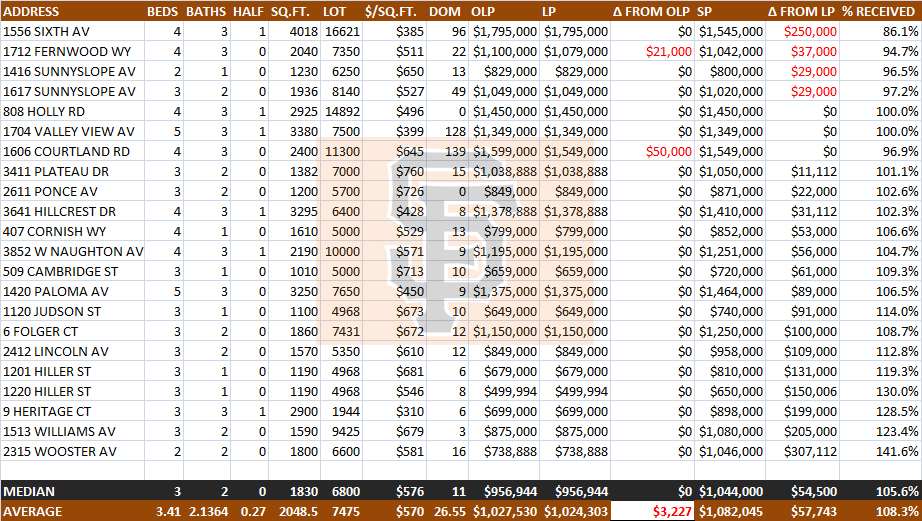 At 22 home sales in Belmont this March, we tied last year’s impressive increase of 29% over 2011 with 22 sales once again.

The time it took to sell a home in Belmont went from 38 days last March to only 29 this year—just one more affirmation of the incredibly hot market.

Sellers enjoyed another boost in the percent of their asking price they received. In March of 2011 sellers received 99.5% of asking which jumped to 101.6% in 2012 before being eclipsed by this year’s impressive 108.3%. Sellers that are worried about what they pay their agent should think less about negotiating a ½ % discount in commission and more about hiring the best agent with the best results. My parents called that “Penny wise and pound foolish”.

This statistic is used represent the “Month’s of Inventory” in a given period. Essentially the time it would take to sell the entire existing inventory of homes at the current rate of monthly sales. In Belmont, that number has been dwindling each month until it reached .6 (less 18 days of inventory). That number alone might not have much meaning unless you understand that the housing inventory as whole in the US stands at 18 months—not 18 days.

Is it because there are more sales, or a declining inventory due to fewer new listings—or both?

With buyers and agents complaining about the lack of inventory, and with the lack of inventory playing a large role in the multiple offers we’re seeing, we decided we’d add a new graph to our statistics page that tracks the number of new listings and sales each month in select cities.