In order to know what changed in our housing market, one must understand that markets are constantly in flux, it’s just hard to see when you are in the middle of one—sort of like being in the eye of a hurricane. We looked at home sales in Belmont and compared the periods from January to September for 2015 and 2016. We’re always asked what’s going on in our market and we like to be armed with facts.

Most people want to know if the housing market is in the seller’s or buyer’s favor-if prices are going up, steady, or dropping. Buyers want to know as they are trying to decide if they should wait and see what happens with the market, or just move forward with life’s plans.

Anecdotally, many agents will tell you their opinion based upon their personal observations. If they had a hard time selling their last home they might tell you the market is “changing” and if their last listing flew off the shelf they might proclaim the housing market to be as robust as ever. But whatever people feel, the numbers don’t lie. They are an unemotional representation of what is occurring in a given market.

Let’s first discuss the market conditions. There’s a lot of hyperbole as to the state of our current housing market. Sellers are still in the mindset that they hold all of the cards, yet buyers are beginning to push back on prices. Sellers are receiving fewer offers, many have had to lower their asking prices, and homes are often times closing below the asking price—something that rarely happened from 2012-2015. This would suggest a shifting market.

Clearly, the sky is not falling, the shift is towards a more normal market, where homes sit on the market longer, and may sell above, at, or below the seller’s asking price. This long awaited market shift is not a correction, but rather a predictable and healthy move towards a more balanced and sustainable market. To be blunt, prices have risen to a level that the majority of buyers can no longer afford.

We first examined all of the home sales in Belmont that occurred in 2015 through August 31st in order to compare with the same period in 2016. We added no search filter other than the date range, since the larger the pool of sales, the more reliable the data.

Here are the data: 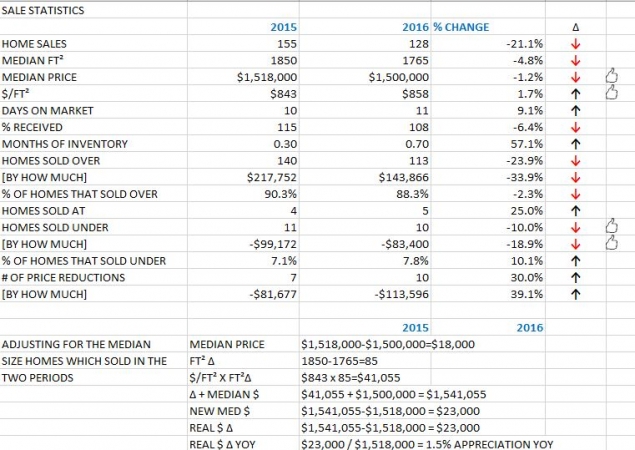 We added an arrow to represent if the numbers went up or down as compared to 2015, and then rated with a “Thumb’s Up” icon for those parameters that showed little change or improved a bit over 2015.

Note that while the raw median home price dropped in 2016, you can see at the very bottom of this inset that we made an adjustment, since smaller homes sold in 2016 of the two periods we examined. So for example, although the size of homes which sold were 4.8% smaller in 2016, they only sold for 1.2% less. Could that be interpreted that the median price actually rose 3.6%? Our numerical calculation based upon price per square foot comes up with 1.5%. In either case, it’s a modest increase year over year at best.

On a macro-level, when we look at the San Francisco Metropolitan Statistical Area (SFMSA) as produced by Case-Shiller for Standard and Poor’s, which encompasses the counties of Marin, Alameda, Contra Costa, San Francisco and San Mateo, one can see that there was a nominal 1% increase in home values between May and June alone. This lends more credence to our theory that home values are initially topping out in higher priced areas like the Mid- Peninsula.

It’s clear that a market shift has occurred. While the median home price reflects a marginal change year over year (YOY), in almost every category there’s a distinct shift towards a more normal market. There were fewer homes selling for more than the asking price and the ones that did sell over asking sold for 30% less than in 2015. There were more cancelled listings, and more price reductions for greater amounts. The inventory of homes for sale is growing—up from 0.3 to 0.7 months of inventory (still considered seller’s territory).

The month’s supply of inventory is the measure of how many months it would take for the current inventory of homes on the market to sell, given the current pace of home sales. For example, if there are 50 homes on the market and 10 homes selling each month, there is a 5-month supply of homes for sale. The months of supply are a good indicator of whether a particular real estate market is favoring buyers or sellers. Typically, a market that favors sellers has less than 3 months of supply, while more than 6 months of supply indicates an excess of homes for sale that favors buyers.

Belmont still has less than one month of housing inventory but Foster City, also on the Mid-Peninsula, is currently running a housing inventory level of 3 months. What this means is that the market shift will no doubt continue until there’s a full blown correction. We could be years away from that happening, but we appear to be moving in that direction and we’re also moving into the slowest part of the season (winter), when seller’s typically net the least for their homes. In addition, if interest rates rise—and they should since they are at historic lows—that too will have a damping effect on home values in the near future.

How long will the new normal market continue? We’ll save that wild card question for other talking heads. Nobody really knows of course, and anybody that professes to know should scare you. However, the market appears to have hit a price threshold. As fewer and fewer buyers can qualify for the median priced home, more sellers will be getting less windfall profits like they did during the meteoric rise over the last three years.

Drew & Christine Morgan are REALTORS/NOTARY PUBLIC in Belmont, CA. with more than 20 years of experience in helping sellers and buyers in their community. They may be reached at (650) 508.1441.