July is a great month in Belmont as the wind winds down a bit in anticipation of our Indian summer.

We hope everyone had a great Fourth of July weekend and our slightly warmer than usual weekend.

If you are interested in the local microclimates in Belmont you can visit Weather Underground’s web site where folks like us upload our personal home weather station data. It’s interesting to see the various Belmont of micro-climate pockets.

On to the numbers… 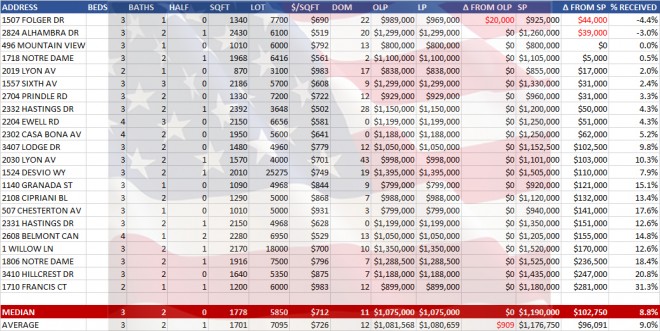 Talk about low inventory–real estate has been very slow this week as you can imagine. Tuesday was our Broker tour day and there no new listings in Belmont or San Carlos to even view. We can’t remember the last time that happened.

In this post we visit the home sales in Belmont for the month of June 2014.

Sales of existing single family homes dropped 15% over last year from 26 sales to 22 this June.

Compared to June of last year, single family residential median price levels rose in all counties with Santa Cruz County up 20%, Monterey County up 16%, San Mateo up 14%, San Benito up 15% and Santa Clara County up 12%.

The time it took to sell the average home in Belmont was 12 days—down from 14 last year.

This is the one statistic that indicates a slowdown in the rate of market appreciation. In 2013 the average seller received 112% of their asking price. That dropped to 109% this month—exactly on par with last month.

What does this drop mean? It’s probably indicative of values getting closer to where they should be for now. The initial increase we have seen over the last two years was clearly unsustainable but also understandable.

Prices had dropped well below expected value levels and that deficit was easily wiped out in 2012 as the market began its rebound in earnest. In 2013 we saw the rebound continue into unchartered waters and prices hit a high watermark. This year we see more of the same but as prices continue to rise fewer people can qualify for the median priced home and begin to seek less expensive cities—watch out east bay.