There may be a beneficial convergence for buyers in the housing sector as declining interest rates and home values are occurring at the same time resulting in a boost to the housing affordability index.

Regionally, housing affordability rose in most counties in the San Francisco Bay Area but was down in Los Angeles County and Fresno County.  At 77 percent, San Bernardino County was the most affordable, while San Mateo County was the least affordable, with only 25 percent of households able to purchase the county’s median-priced home.[ii]

But that could be changing–not that San Mateo County will ever be more affordable than most of the counties in the state (due to the high home values), but with the interest rates hovering around their lowest point in recorded history, and home values reverting to levels not seen since 2002, it may be the perfect accelerant to fuel a recovery.

In Palo Alto for example, well known for its resiliency during housing downturns, more homes sold last month in November of 2011 for over asking than did for less. That’s a stunning example of market elasticity. Also interesting on an anecdotal note is that when Palo Alto values rise they carry surrounding communities along like a surging tide.

It’s possible that home values decline further. And it’s possible that one might time the market perfectly at the trough but the longer buyers wait to enter the market at this phase of the recovery, the more risk they take that they will miss the perfect storm and either rates will rise, home values, or both.

Note that while home values have reverted to 2002 levels[iii], interest rates were more than two points higher in 2002 than they are today making the same price home in 2002 far less affordable than today. 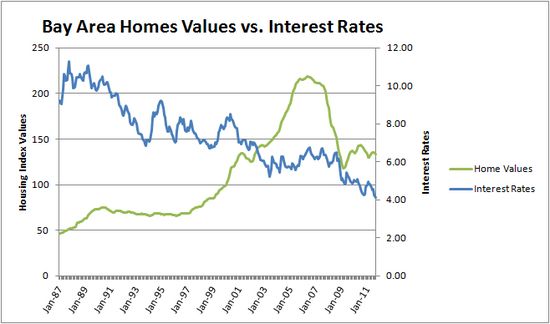 Click on the image for a full sized graph.