We hope that your holiday is filled with great times and fun with family or friends!

This is our last market update for the year as December’s won’t roll out until mid-January. That’s where we re-cap the entire year and take our best guess as to what’s  in store for our market in 2014.

We hope you’ve enjoyed this year’s market updates. Belmont has seen some amazing appreciation this year and November was certainly not a spoiler. 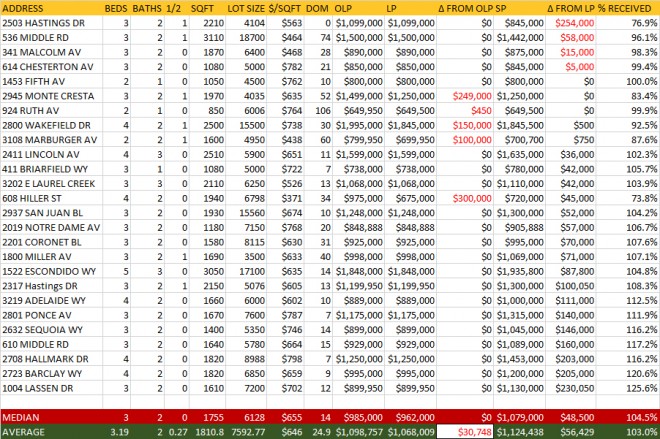 The seasonal slowdown has thus far not materialized. Belmont had 40% more sales this November than in 2012—25 compared to only 14 last year. That might seem staggering but as it turns out last November of 2012 was a bit of an anomaly in that very few homes sold when historic sales trends are reviewed.

The big deal once again is the median price. Since virtually the same size homes sold last November in Belmont as did this year, the median price increase this year more-or-less accurately reflects the increase in Belmont home values. Last November the median home price stood at $901,500 while this year we hit $1,089,000—a 21% increase. But most important is that this is not a blip on the radar screen. Belmont homes values set a new record as except for April, Belmont has posted million dollar plus median home prices the entire year—a first in the history of Belmont.

Have the values surpassed those at the peak of our market? Undeniably—for Belmont.

The time it took to sell a home was essentially unchanged at 23 days as compare to 27 days last year.

Interestingly enough we had 15 new listings hit the market in November this year. The warmer than usual weather might have had something to do with it but that represents a 50% increase over last year.

The time it would take to sell the existing home inventory at the current monthly rate of sales hit another low at 0.5 months. To help put the low inventory into perspective, nationally, that number still stands at around five months.

Still holding at over 100% of asking, November did not disappoint as Belmont sellers enjoyed on average 107% of their asking price.  Some of you may have noticed that this number does not jive with the chart above. That’s because we calculate the percent received in our chart as a percentage the seller received of their ORIGINAL asking price, not the reduced price. The Multiple Listing Service tracks it as a percent of the price when the home sold, and that methodology accounts for the difference between our number of 103% of asking and the 107% reported. Either way, it’s a big number.

There were more price reductions than normal this November. 20% of the sellers lowered their asking price while 16% received under what they were asking for their home. Still, 68% received more. But those numbers are just a tad bit less impressive than last November which could be rationalized because sellers are getting more aggressive in their initial pricing and thus are having to lower their expectations down the road in terms of a price improvement.

As always if you have any questions about our report you are welcome to reply to this post or email us at info@morganhomes.com or call at 650-508-1441.

And if you are considering a move in 2014, please take a moment to reach out to us. Well show you why year in and year out we have the best record for selling homes in Belmont.

Have a great Holiday and Happy New Year!

Drew & Christine Morgan are REALTORS/NOTARY PUBLIC in Belmont, CA. with more than 20 years’ experience in helping sellers and buyers in their community. They may be reached at (650) 508.1441.