Does the Belmont school enrollment window force buyers to pay more for a home in the spring?

We see it every year in a growth market. Belmont home values skyrocket in the spring with multiple offer bidding battles, then the market calms down during the summer and trails off into the winter before starting the whole cycle over again.

It has been postulated that since much of the driving force for competitive neighborhoods is the school A.P.I. scores, it only seems natural that folks would want to be settled into a new home and secure their home school attendance before the open school enrollment period ends.

In order to test this theory, we had to gather information on Belmont’s system for school enrollment.

The first (and most coveted) open enrollment period—the one which will give your child the best chance of getting into their home school—begins in mid February and ends at the end of that month. That’s a pretty short window to time a home purchase. But assuming one did, then the optimal time to purchase a home would be in December and January so that a close of escrow would occur prior to the end of the first open enrollment period. Since the district will accept a purchase contact as well (as proof of residency), one really needs to only be “in escrow” to get their child enrolled so a February home “sale” may also qualify for the first enrollment period.

If school enrollment periods have an impact on home prices through competing offers, one would expect the percentage that a seller receives of their asking price to be higher in December through the end of February to coincide with the initial open enrollment session.

The next enrollment period begins immediately following the first one at the end of February—the start of March—and goes all of the way until the middle of June. This second enrollment period is less desirable than the first one yet a much larger window of time—it also happens to coincide with the highest percent of asking prices received by sellers.

The final enrollment period begins the Monday after the last one ends and continues until school starts—which this year will be delayed until September 11th.

We plotted these two trends on a single graph to try and visualize a pattern. Clearly there’s a pattern of spring sellers enjoying the highest percentage of their asking price but the school enrollment window may have little effect on the amount a seller receives. If the enrollment window were the majority driving factor then the most competitive bidding should be in December and January as well as a bit into February. Yet in this graphic we find the highest percentage seller’s receive each year to be around May—well after the second enrollment period begins.

Of course May sales were likely consummated in April but still that’s well outside the early March 1 second enrollment opportunity.

There are a lot of other factors that come into play during the spring buying season and open enrollment periods, not the least of which is that the weather gets better.

Rather than there being one trigger that sends buyers into a purchasing panic, we’d venture an experienced guess that it’s a combination of factors that makes the spring home buying season so rewarding for sellers and attractive to buyers: The weather gets better, more homes become available so more buyers enter the market, football season has ended and Sundays are once again free to view open houses, tax season is around the corner and buyers are looking at huge tax bills while wondering how they could mitigate that with a mortgage, and the summer is approaching when many sellers want to get into a new home before the next school year begins.

Another interesting hypothesis that we have put forth involves simple frustration on the part of home buyers. It goes like this, buyers start looking for a home around early spring in earnest. They’re new to the game and thus miss out on multiple homes in multiple bidding situations. At some point they are so frustrated buyers go into winter hibernation only to thaw out the following spring more determined than ever not to end up empty handed again. It’s these buyers that step to the plate and pay whatever it takes to get the ideal home—often paying considerably more than past sales justify. And the cycle begins again. 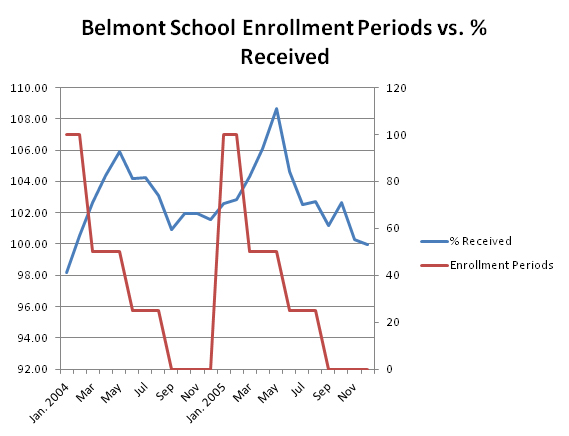 As the graph illustrates, there’s only a quasi relationship of enrollment periods and the high percentage of selling prices, which once again, we feel has more to do with it being spring than the schools.

In this second graphic we used data for the same periods in 2004-2005 and again in 2012-1013 to see if last year was an anomaly. Note how similar the two period’s data points are even though they are separated by nearly a decade.