Have you heard rumblings that our local housing market which has been racing away like a runaway train is beginning to run out of steam, or are you in the camp that there’s still no light at the end of the appreciation tunnel?

Clearly some Belmont sellers are being lulled into believing that our housing market is just as strong as during the spring. We personally encountered two sellers last week who defied all logic and refused to sell their homes unless they received considerably over their asking price. Neither seller has since sold their home.

If a seller markets their home and receives ten offers, it’s pretty safe to say that at least the day they sold their home, they got as much as they probably could. Of course there are variables such as how well their agent handles the negotiations, but absent the variables, the highest price pretty much sets the high water mark for the home’s value on that day.

Assuming that the high bidder is the winner (they aren’t always), if an identical home were to pop on the market a week later should that seller receive more or less than his lucky neighbor down the street? Since the highest bidder now owns a home, the second seller is left with the next highest offer buyers. The question becomes will one of those buyers be kicking themselves enough to pay even more than the last home they just lost?

It appears some Belmont sellers believe that the market owes them as much or more than the last sale. Unfortunately, it doesn’t work that way. The buyer’s determine the value not, the sellers or their agents.

The fall has brought with it a chill in the air which has cooled the superheated housing market seen earlier this year. Most of our evidence is empirical, but ironically the numbers don’t necessarily bear that out. So why do we feel the market has cooled? We are part of a Mastermind group of top producing REALTORS who gather monthly to discuss market trends and best practices. At our most recent meeting on October 17th there was a consensus from our think tank colleagues who are scattered all up and down the Peninsula that indeed the number of bidders is waning. Being in the trenches gives us a unique perspective about  multiple offer situations. Of course this begs the question, is it a seasonal adjustment or is the wind of appreciation beginning to change? 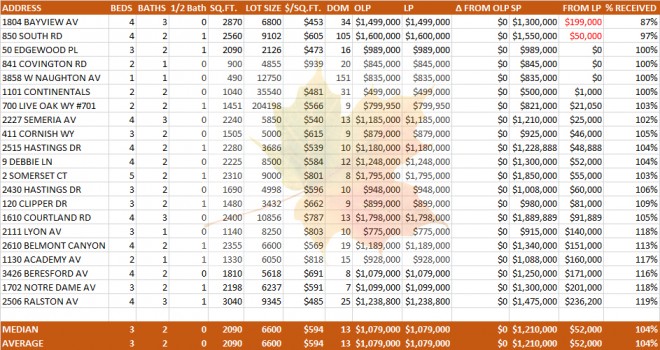 Home sales in Belmont for the month of September 2013 were brisk with 18 sales—just one fewer than last year at this time.

Last year there were 25 new listing in September as opposed to the 36 new listings which harkens back to the traditionally higher spring listing levels.

Overall, inventory of homes for sale were still lower than in 2012 with only 33 homes on the market, but with the influx of new listings in September, the Months of inventory increased to 1.83 up from .73 just a month earlier—still lower than the 1.95 a year ago.

The average time it took to sell the homes which sold in September was 13 days this year, as compared to 28 last year. This is not to be confused with the average DOM for all of the homes which are not selling—that number stands at 34.

Belmont sellers received on average 105.75% of their asking price—besting the 101.98 a year ago but far shy of the 109.5 which seller’s received just last month.

This year, 78% of the homes sold for over the seller’s asking price—up from 58% a year ago, while only 11% received under their asking price, as opposed to last year when 32 percent received less.

Has the market cooled? Certainly. Is it a seasonal adjustment or a foretelling of a market to come? Visit our blog page next week when we will look at the seasonal price and sales trends in more depth.

Disclaimer:
Drew & Christine Morgan are REALTORS/NOTARY PUBLIC in Belmont, CA. with more than 20 years of experience helping sellers and buyers in their community. They may be reached at (650) 508.1441.
The information contained in this article is educational and intended for informational purposes only. It does not constitute real estate, tax or legal advice, nor does it substitute for advice specific to your situation. Always consult an appropriate professional familiar with your scenario.
Drew & Christine Morgan did not necessarily participate in these sales.