One would have to be living under a rock to be oblivious to the reports of the hot Bay Area housing market. The San Jose Mercury released the headline yesterday that in the nine Bay Area counties the median home price rose 33% year over year this June.

June of 2012 was about the time we were seeing strong signs of a housing rebound but it was still too early to declare with certainty that the rebound would last—that didn’t occur until November of 2012.

One might wonder if Belmont is under performing since home prices only rose 6% this June over last. There’s actually good news for Belmont homeowners in these statistics, here’s why:

One of the main reason that home values have skyrocketed year-over-year in the nine Bay Area counties is that many of the cities in these counties had home prices which felt to levels far below where any market correction should have predicted they would land. In other words, the hardest hit areas with the most drastic price reductions are seeing the largest percentage rebound. Since Belmont’s home values fared rather well during the downturn, our rebound is more sensible.

Don’t tell that to buyers who are trying to get their first home. They’re seeing bidding wars going on which in June of 2013 made the average home in Belmont sell for 112% of the initial asking price. 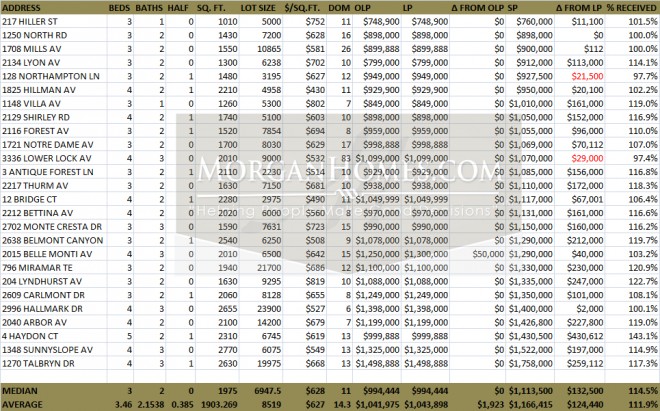 Click on the graphic for a full-size screen shot

Home sales in Belmont—contrary to the nine Bay Area County trend—picked up (albeit an insignificant amount).  June of 2012 saw one more home sale than last June with 27 homes closing escrow.

The only event that helped sales in June of 2013 was that in May we had a plethora of new listings—35. Year over year that was a strong seasonal influx of new listings.

The housing inventory in June of 2012 stood at 39 homes for sale with 25 new listings hitting the market; contrasted to June of 2013 when there were only 19 homes to sell and 15 new listings. The good news that might save July’s statistics is the rally of new listings after the Fourth of July week that saw a listing hiatus.

We always look at the size of homes selling in the two periods to see if there is an inequity but with the difference between June of 2012 and June 2013 being a meager 55 square feet smaller in 2013, it’s statistically insignificant. Why? Because appraiser don’t even account for square foot difference of less than 100 square feet.

DOM (Days on the Market)

Price reductions are another way to catch the pulse of the market. The more sellers who have to lower their asking price expectations in order to attract a buyer says more about buyer trepidation  than seller’s lofty and overzealous price expectations. In June of 2012 four of the 26 sellers lowered their asking price while this June only one seller suffered from that fate.

Interest rates are rising and how that will impact our local market is yet to be seen. Clearly it has knocked a few buyers and sellers off of the fence.  It’s anyone’s guess how our local market will react but intuitively we believe that the days of multiple offers in the double digit range may be waning.

Drew & Christine are local Belmont REALTORS® and homeowners with more than 20 years experience.