It’s time to do the numbers, and I can hear the jingle playing in my head “We’re in the Money”–a little ditty from NPR’s Market Report segment which they play when the stock market is up. As each month goes by it seems Belmont home values keep setting new high water marks–not that we’re insensitive to the woes of buyers. We represent Buyers too and we know how frustrating it can be to secure a home in today’s market. The inherent problem for buyers when timing the market is that when housing prices are down, typically so is the overall economy and nobody feels much like taking on an enormous mortgage when coworkers are being laid off and empty cubicles are selling for pennies on the dollar on Craig’s list. Finally, when the economy picks up and everyone feels happy again they all starts to buy at the same time and drive up prices with overbidding. Add to that the sense of interest rate lock urgency and you have a market running full speed ahead. It’s no longer how much a home will sell for, it’s how far over asking will it go. 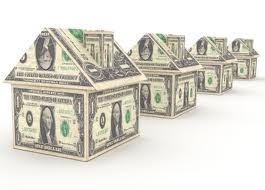 Can You Save Fast Enough?

This month just about every positive indicator for sellers was up. In fact they were all up except the days on the market [DOM] or the time it took a seller to sell their home—that statistic was down which really means it was up for sellers—another positive sign.

So let’s begin by dispensing with any question of where the market is today—it’s clearly rebounding and doing so at a pace like we’ve never seen—and we’ve seen a lot of ups and down in our 20+ years of selling homes.

What’s driving this rebound at a clearly unsustainable level? Ironically, the good news may be is it’s a temporary influx which may soon be abating. The days of government intervention in the market by keeping interest rates artificially low with bond purchases may be numbered—at least that’s what Wall Street thinks. When we wrote this the stock market was singing “Stormy Weather” as news of an impending slow down in bond purchases sent the stock market into a bit of a humble tumble.

Looking at Belmont home sales for May 2013, we see that there’s no more debate about how the market is doing. The only question is, how long will this corybantic pace continue? 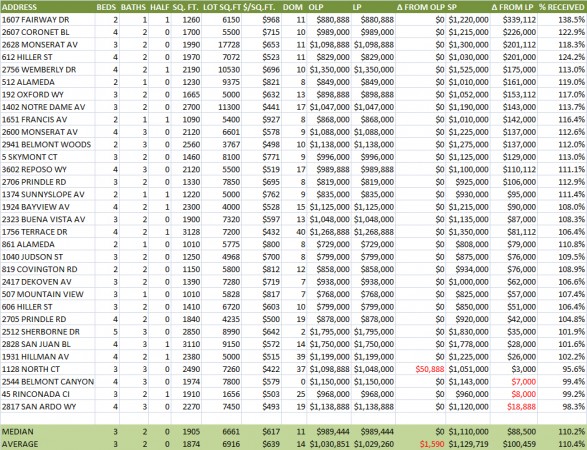 Home sales, after being down past month, rebounded with a 23% increase over May of 2013 were 32 homes traded hands as compared to 26 last May. The last time Belmont had that many homes sell in one month was in August of 2005 when 35 homes sold—well before the market correction which began in April of 2006 [it took well into another year for the national housing dilemma to begin to affect Belmont’s more insulated economy].

Belmont home values reflected the median price topping out at $1,100,000 this May which has only been eclipsed twice in the history of Belmont home values—once in 2007, and most recently in January this year. One cannot not escape noticing that the median home price in Belmont has been over a million dollars four out of the last five months—a pinnacle in Belmont’s housing values trends as never before have we seen a sustained median home price over the million dollar mark.

So did larger homes sell this year? Each month we’re sure to look and see if that’s the cause and each month the answer has been yes, but only nominally. Certainly not enough to account for the year over year gains.

What does this all mean? It means that a home 6.4% larger cost you 33% more this year. It means that Belmont home values are rising faster than most buyers can save money.

DOM [Days on the Market]

Statistically speaking, if you are going to get more for your home than you are asking, in Belmont that means you’ll be on the market less than 14 days. Between 14 and 21 you are considered lucky to get your asking price and rarely does a seller get their asking price after 21 days on the market.

This month’s numbers bear that out in spades as all of the homes which received more than their asking price did so in only 13 days. No home sold right at the seller’s asking price but of the few homes which were overpriced, they languished on the market for on average 22 days and received 98% of their initial asking price as compared to everyone else who netted on average 110%. Can you imagine being one of the few sellers who received 12% less for their home than everyone else? Clearly not all agents are created equal.

Of course getting too much for a home is usually the result of the same root cause—an agent who has no idea how to price a home—just that in the latter case the seller is much happier and probably never the wiser.

We’ll leave you with this one watercooler statistic. Did you know that in May the average Belmont home sold for $100,000 more than the asking price!

Drew & Christine Morgan are REALTORS/NOTARY PUBLIC in Belmont, CA with more than 20 years of experience. They may be reached at (650) 508.1441 or info@morganhomes.com