Since the housing recovery began in earnest in 2012, Belmont has enjoyed a steady increase in home values. Since 2010 Belmont’s home values have increased 44%, while year-over-year prices continued to increase 17% in 2014. 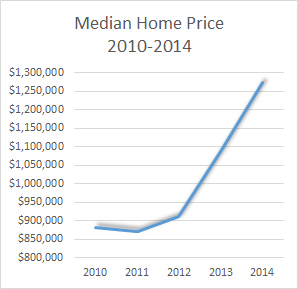 Part of the rapid increase in home values is due to historically low interest rates coming off a reduction in home values during the Great Recession. Another influence continues to be the influx of new jobs which jump started the need for housing in 2012. But the scarce housing inventory may have been the largest contributing factor by creating bidding wars and over exuberant offer prices.

To put the meager housing inventory into perspective, there were four times the number of homes for sale at the end of 2010 and 2011 than there are now, while new listings in 2014 were a quarter of what they were in 2010.

The time a home sat on the market dropped 70%, from 52 days down to just 16, while the percent a seller received increased 10% as sale prices averaged 109% of the asking price last year.

It’s safe to say that Belmont’s robust housing market has become self-evident. But how does Belmont stack up to other nearby cities such as San Carlos?

San Carlos bested Belmont in the median price category coming in at $1,425,000—11 % higher than Belmont for the year. The rate of appreciation over the past four years as also been higher as San Carlos home values increased 52% since 2010 as compared to Belmont’s 44%.

When compared to San Mateo County as a whole, a different picture develops as both Belmont and San Carlos are at the front of the pack. San Mateo County reported a 15% increase in the median home price year-over-year—with a median home value still 21% lower than that of Belmont’s. Here’s the supply and demand answer as to why home values are skyrocketing—the available homes for sale in all of San Mateo County dropped 73% over 2010 and the number of new listings dropped 21%.

We start 2015 with the lowest inventory of homes for sale since we started tracking home statistics in 1998. This will invariably create more multiple offer scenarios forcing buyers to outbid one another for their ideal home. This in turn will continue to put upward pressure on home values. And if interest rates remain stable (currently at a 1.5 year low), we expect another year of double digit appreciation, though we also expect the rate to slow as it did last year, down 2% from 2013.

If you are considering selling your home we’re somebody you should know. Be sure and include us in your interview process—we’ll show you our proprietary EXCITE listing program which has netted our sellers more than any other top Belmont agents.