I wasn’t on a budget today so prices were not was I was looking for. When it comes to sushi like many things in life, “Good things aren’t cheap and cheap things aren’t good”.

What I was looking for was a place that had real crab sushi–not imitation KRAB. You’d be surprised how many local places use that crap (i.e. Sushi Monster and M E N U in Belmont, Ganko in San Carlos)–the list goes on and on.

Why is real crab for sushi important?

I explained to Kau my aversion to fake crab and he then handed me a piece of some of the sweetest snow crab I have ever eaten. If you’re getting fake crab, you have to wonder what quality of fish a place is buying. 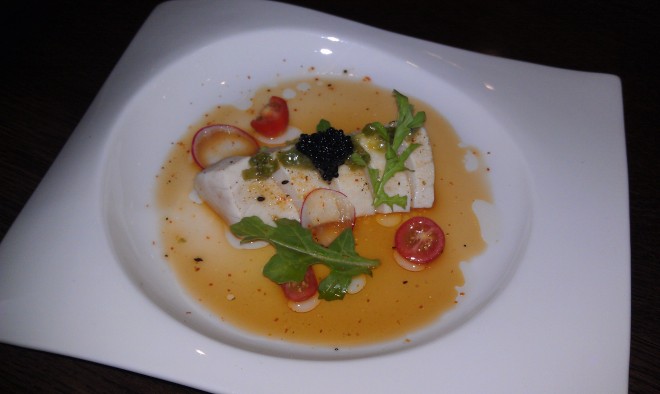 I’ve had to-go from Seiya in San Carlos on Laurel Street before but this was my first experience at the sushi bar. Kau, as I later discovered was his name, is a charming and capable sushi chef/owner.

I was one of only three people eating a late lunch at the sushi bar so it was rather quiet and I had a nice conversation with the Kau who handily dished out some choice custom creations as well as menu favorites.

To start I had a few Zensai [appetizers].

Hamachi Carpaccio was my first choice which he sliced thin and seared, very tasty and fresh if not a little pricey [$16.00] but worth paying extra for the quality.

I tried two Robata skewers–the pork belly [Butabara $5.00] which was not as tender and rich as I would have expected, and the scallops [Hotate $7.00] which seemed sweet with a nice relish atop–a rather good size portion for one skewer.

Kau made me one of my favorite hand rolls–the Morgan Roll–a very Americanized hand roll with salmon skin, eel, cumber, and avocado. Nice crunch from the eel and cucumber, balanced with the creaminess of the avocado [$8.00]

Albacore Tataki [$15.00] was nicely presented and once again the quality of the fish showed through. And the fried garlic really added a nice crunch and woke up this otherwise predictable dish.

But my favorite was when I asked Kau if he had any butter fish–also known as, black cod. It was one of my favorites ever since I had it at Sansei Sushi on Maui. There’s a lot of confusion around “butterfish” as it’s really a Hawaiian preparation rather than an actual fish. In Hawaii, ‘butterfish” is black cod marinated in a rich miso sauce and usually slightly cooked. The claims that it is also sablefish or escolar are wrong and can be actually dangerous. But don’t believe me, Google it…

I asked him to prepare the cod anyway he liked and this is when his talent really shown through. He once again seared it ever so lightly, sliced it thin and added citrus ponzu sauce, truffle oil, and topped it with chopped wasabi leaves, daikon leaves and finally caviar [$21.00].

Thanks Kau, definitely worth a trip.