What You Hear About Median Home Values May Be Completely Wrong

The Multiple Listing Service for the Bay Area peninsula has launched the December sales stats and there is some compelling evidence that Bay Area homes values dropped slightly over 2006.

The median home price is the midpoint at which half of the homes sold for more, and half sold for less. Of course if smaller or larger homes are selling then these numbers are easily skewedâ€”especially with a small market sample. 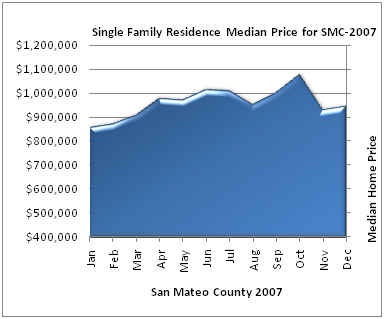 This statistic could be wildly inaccurate though. Simply put, there’s no easy way to determine if the size homes which sold in a given year were larger or smaller than a previous year’s. Intuitively, given a large sample–totaling all sales for San Mateo County for example, one would expect the median size home to remain relatively constant and thus portray an accurate picture of the median home values. But unique market forces such as the ones we are currently experiencing are just the sort of thing that could skew those numbers. If for example, more first-time buyers purchased homes, the median size home included in the sales calculations would undoubtedly be smaller and thus skew the median price lower.

The Multiple Listing Service (or MLS system) which essentially retains all agent related transactions has its own inherent flaws. They derive the median home value by taking the median price for every home sold in a given year. If the housing market has a dramatic shift during the course of the year, it’s entirely possible that the median home price reported has nothing to do with the home values at the end of the year on December 31st.  In other words, it matters not whether home values climb for the first quarter of 2007, if in December they’ve dropped dramatically. The MLS median price is more a measurement of the average median value rather than the true median price at the end of the year.

Last year was a prime example of why reporting the median home price in this fashion is erroneous at best. In Belmont for example, there were 94 sales in the first six months of 2006 and 92 in 2007–virtually unchanged. However, the next six months after the July mortgage issues came to light, there were only 127 sales in 2007 compared to 167 in 2006. It’s a strong indication that the market changed in the second part of the year and why measuring the median values at the end of the year, rather than reporting the aggregate is a methodology more suited to a changing market.

In a small market sample such as the town we live in, Belmont, Ca, it’s even more imperative that one adjust for the median size of homes which sold. We incorporate this onto our calculations and low and behold an entirely different picture emerges.