Are Belmont home values or sales tapering off? Are we in for a cool down?

This month we look at April 2014 sales for Belmont to see if home sales or values are waning.

There’s much speculation even among our colleagues as to what is happening in our market and how sustainable our current housing environment may be. Most agents believe that we cannot continue at this pace but beyond that there seems to be no quorum on where the market will go from here.

Rather than guess what may happen next we like to watch what is happening to see if there’s a pattern.

Each year our housing market endures seasonal fluctuations at various times which affect the inventory levels, the number of sales, the number of new listings and even the percent a seller receives. Varying market conditions weigh more heavily on the median home price and the days on market.

When we look at April’s number for 2014 we’re comparing year-over-year numbers for the same period. This way we can objectively analyze where we should be in the seasonal sales cycle and dispense with any hyperbole about whether the market is “cooling down” or “heating up”.

Whenever there’s even a slight shift in the wind of inventory or sales from one month to another it’s second nature for agents to think the market has shifted into a cool off phase, when often it’s nothing more than a seasonal fluctuation which should be expected.

Looking at the important statistics we track each year, we went back to the beginning of when our Multiple Listing Service retained records—1998.
The question at hand is not whether April sales or listings are up or down as compared to March, the question is how do April’s numbers compare to every other April?

In analyzing the April markets, we allowed for a small adjustment when looking at the numbers for each April to avoid comparing dissimilar markets and to eliminate a wash-out of statistical values. We not only compared ever April since 1998 to April of 2014, we also compared every hot April market and every slow April market. 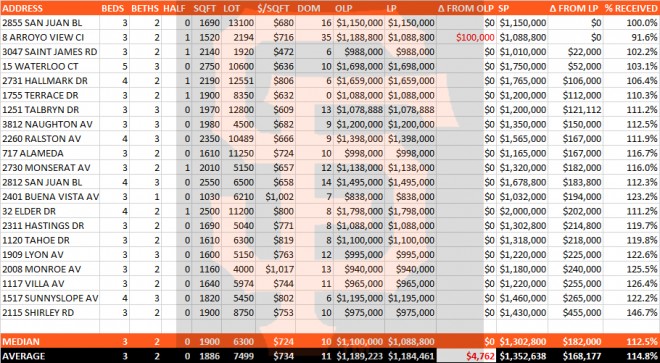 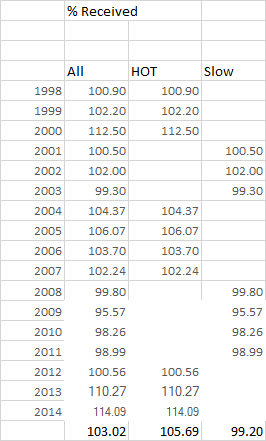 In each case April 2014 indicated an intense market. For example, the percentage a seller receives of their asking price in April has averaged right around 103% since 1998. In slow markets April’s percentage received has been a paltry 99.6% and in hot markets it has skyrocketed to 105.69%. This April it stood at 114.09%–8.7% higher—and 8% higher than the previous high in 2006 at what was then the peak of the market.

NEW LISTINGS
The number of new listings which have come on the market in April of each year has averaged 35. In a slow market Belmont averages 39 new listings for sale and in a hot market 32. The previous high listing count was in 2005 when 43 new listing hit the market. This year there were only 25–a low not seen since the slow down in 2007 when there were only 23. The current number of new listings hitting the market is statistically aligned with that of a slow market–not a hot one. Remember, this is April under a microscope. Lower than typical inventory could serve to continue to put upward pressure on values.

MONTHS OF INVENTORY
The time it would take to sell all of the homes currently on the market at the current rate of sales is referred to as the “Months of Inventory”. It’s designed to provide a useful ratio between listings and sales. Expressed as in terms of “months”, it’s a good indication of the strength of any housing market. April’s months of inventory has averaged 2.44 months over the past 16 years. In slow years it has averaged 3.73 months and in hot markets averaged 1.54. In April of 2014 it stood at 1.0–an all-time low with April of 2005 coming in second at 1.21 months. Nationally, this number stands around 6.3 months.

When sales are down from March to April, or the number of new listings rises incrementally—as they did this March to April when three more homes came on the market, it’s less important than where they should be historically.

The most interesting pattern we observed was when we filtered out for hot and cool markets. We notice that periods of hot and cool markets seemed to last about three to four years each before a correction. The last correction began in 2012. Has the market peaked? Statistically speaking, April should soon…