The good news is Belmont has shown a steady increase in home sales
despite lower than normal inventory levels. The median home price in Belmont is
tracking in an upward directions and it’s clear that Belmont is firmly in a
seller’s market territory once again. 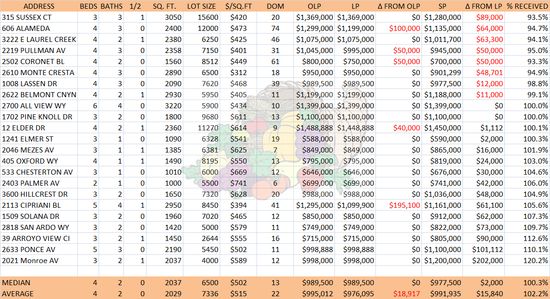 October of 2012 saw more than a 100% increase in home sales
year-over-year with 23 home sales in Belmont as compared to only 11 last
October; this despite the fact that the number of new listings, at 23, was
unchanged year-over-year. With 23 new listings in October of 2012, and 23
sales, the months of inventory has dropped from five months a year ago to
less than two in 2012. The national inventory of homes stands at around a six
months supply.

Always the interesting number to wrap your head around in Belmont.
Since the statistical sample is so small it tends to swing wildly depending on
whether smaller or larger homes are selling in a given month.

This October the median price was $989,500 compared to just
$806,000 a year ago representing what might appear to be a 23% increase
year–over–year. It’d be easy to leave it at that, but the fact is in 2012 the
size homes that sold in October were 267 square feet larger than last year. If
we adjusted last year’s median price by multiplying the difference in square
footage by the median price per square foot that homes are selling for, we get
$134,034.

Looking at it from another angle as a percentage it works out like
this:

In October of 2012 you could buy a home 15% larger than in October
of 2011 but you had to pay 23% more. So did values go up 8%? Thatâ€™s probably
pretty close. Certainly somewhere between five and eight percent. The point is
values are going up, not down.

The time it took the average home to sell in Belmont was unchanged
from last year at 22.

Often times in increasing market sellers will want to jump on the
bandwagon of price increases and become overly enthusiastic after seeing what
their neighbor received. Theyâ€™ll list their home at what the last home sold
for, theorizing that if their neighbor received that much, they should be able
to do so as well.

There are inherent problems with this mindset. Assume a seller
prices their home at $998,000 as the seller did on Monroe in Belmont last month
(see graphic) and receives a whopping $202,000 over their asking price with
multiple bidders. This home now closes escrow for $1,200,000 and the neighbor
next door thinks to himself, “Hey, I’ll sell my house for $1,200,000 then too”.
But it doesn’t work that way. The first seller received 120% of their asking
price by attracting multiple buyers to their home and ONE BUYER was willing to
pay $202,000 over the asking price. The next closest bid could have been
$100,000 over the asking price for all we knowâ€”which of course is $100,000
below the highest offer; and the highest bidder already bought a home, so even
if the neighbor as an identical home (which they never do), and were to price
it at the last sale price, they will be woefully disappointed since the next
closest buyer may have been only willing (or capable) of paying $1,100,000.

In each period 9% of the sellers received their asking price.

If you are trying to figure out how all of this worksâ€”why some
sellers get over their asking price and others far less, it all boils down to
the way a home is presented. If you follow our three rules to
profitability, ”Preparation,Price,& Promotionsm/sup>, it won’t happen to you.

You might want to know that of the eight sellers who had to lower
their asking price (by on average $87,000) to attract a buyerâ€”three of them had
to take on average another $50,000 less in the offer they accepted.

One wonders, with some sellers so concerned about the commission
they are paying their agent, why wouldn’t they pay more attention to the
results their agent gets, instead of listing their home with the agent who
gives them the highest suggested list price for their home? That nine percent
swing between a well price home and an overpriced home, at the median home
price in Belmont, translates into nearly $88,000 left on the table.

The information contained in this
article is educational and intended for informational purposes only. It does
not constitute real estate, tax or legal advice, nor does it substitute for
advice specific to your situation. Always consult an appropriate professional
familiar with your scenario.

Drew & Christine Morgan did not
necessarily participate in these sales.

The information contained in this article is educational and
intended for informational purposes only. It does not constitute real estate,
tax or legal advice, nor does it substitute for advice specific to your
situation. Always consult an appropriate professional familiar with your
scenario.

Drew & Christine Morgan did not necessarily participate
in these sales.