Belmont homes sales are continuing their strong push into summer with another year-over-year increase over June of 2011. 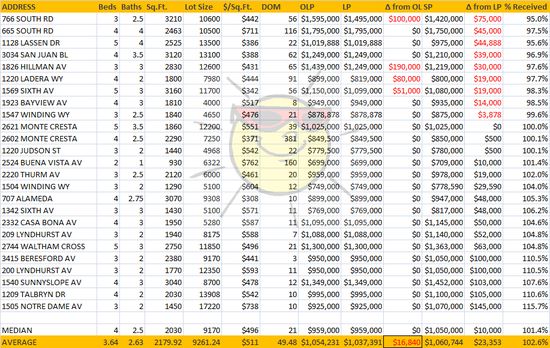 (Click on the spreadsheet for a full size image)

In June of 2012, 25 homes traded hands and closed escrow while in June of 2011 there were only 15. That represents a 66% increase in Belmont home sales year-over-year.

The median price also appears to have increased. While in 2011 the average home sold in June was 1,769 square feet with a  median price of $846,000, this June the median home sold was 2,030 square feet and closed escrow for $1,050,00–a 23% increase in the median price. And while that $200,000 real dollar increase over last June seems impressive, it’s mitigated to some degree if we account for the fact that this June the size homes which sold were 261 square feet or 15% larger. One can loosely suggest that the increase was probably closer to 23%-15% or a more modest 8%.

Still, an 8% increase is pretty impressive considering Belmont home values dropped only around 18-24% over the last five years.

The time it took a seller in June of 2012 to sell their home was once again higher this year than last. Last year the average home sold in 36.8 days while this year they took almost 50 days to sell. And for that, we still have no verifiable explanation.

In June of 2011, 13% of sellers had to lower their asking price expectations while in 2012 that number increased to 16%, one possible explanation for the longer days on market trend.

This is a remarkable change which reflects that REALTORS® are still pricing homes based upon old news and Buyers are continuing to make market-force corrections in favor of higher prices. The benchmark high sale price for a home selling over asking went to a home on Notre Dame that had a beautiful park-like rear yard with a rather small home–1 ,450 square feet–and need quite a bit of updating. That home listed at $925,000 and sold for $1,070,000–selling by $145,000 over asking!

Homes which sold under the asking price in 2012 accounted for 36% of all closings while in 2011 that number was a stunning 60%.

Clearly we are seeing a continuation of lower than usual inventory levels which has the effect of driving up competition.

If you have been waiting for Belmont home values to turn around, they have. It’s clearly a seller’s market right now and opportunity knocks if you’ve been waiting to get top dollar and downsize, supersize or relocate.

If you are a buyer, now more than ever you need en experienced REALTORS® to help you navigate the treacherous offer waters.