Are December Home Values Real? Can we trust what we hear?

Being REALTORS, we’re used to being asked “How’s the market?”, but never more than during holiday social events.

Real estate is the topic of conversation at a lot of social gatherings—we overhear conversations when we are out and about quite frequently. Usually it’s one person telling another about a crazy home sale in their neighborhood, where the final sale price was hundreds of thousands of dollars over asking, or the number of bidders hitting double digits.

That makes for great story telling, and in fact it’s an accurate one at that. Out of the 20 Belmont home sales in December 2015, 10 sold over $100,000 above the initial asking price. So if that’s become the norm, wouldn’t the better story be the home in the neighborhood that closed over a hundred thousand dollars under the asking price? And in fact that was the case in December, when a home on Adelaide sold for $123,000 under the list price of $1,688,000. We’ll save how that could happen for our next post… 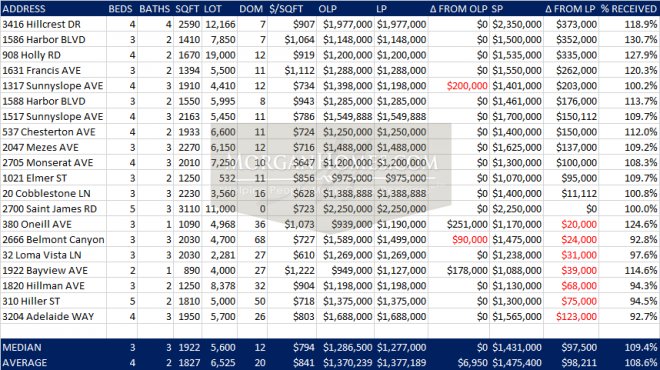 One of the problems with using the median price is that it reflects if there has been a large amount of more expensive or less expensive homes sold in any given period. In these circumstances, you can often notice large differences in the median home price of a certain city from month to month.

For this reason, it is often better to view median prices over longer periods of time and monitor the trends, rather than looking at one month’s figures in isolation.

Last year the median size home in Belmont that sold in December was only 1,430 sqft, while this December it was 1922—34% larger. A 20% increase in price offset by homes being 34% larger could mean that home values in December actually dropped year-over-year. But this is small market sample, relatively speaking, and therefore subjected to these types of wild swings in data points.

To further answer the question of whether values are still on the rise, we turn to a larger market sample—San Mateo County, where instead of the average 15 sales we have in Belmont in a given month, the county as a whole has 350.

Here we find that the median home price trend went up 22% year-over-year. Since this includes many areas which are just now enjoying the rapid appreciation Belmont has seen in the past several years, areas like South San Francisco and Daly City, this number too is a bit skewed and is not necessarily representative of our mid-peninsula cities median home price growth.

Homes are still selling in about 13 days on average. This is not to say that all homes are selling in 13 days, it means that of the homes which sold, they took 13 days to sell. Some homes languish on the market even in today’s red hot seller’s market and do not sell and are thus excluded from this calculation.

The months of supply is the time it would take for all the current inventory to sell if it all sold at the current rate without new inventory coming on the market. In Belmont, it stands at .1—yes, that’s 1/10th of 1 percent a month of inventory. To put that into perspective, nationwide the housing inventory level stands at 5.7 months.

Belmont homeowners enjoyed receiving 109.4% of their initial asking price, as compared to 107.2% in December 2014.

It is interesting to note that 35% of the homes sold closed for less than the seller’s asking price. We contribute that primarily to the slower seasonal period.