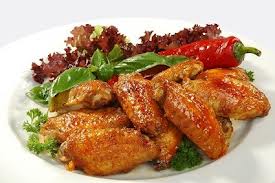 When it comes to chicken wings, we’re both pretty picky. But we’ll share with you our soon not to be secret for making crisp tender chicken wings every time.

Of course start with fresh chicken wings and try and get the whole wings as these will retain more internal moisture than already cut wings. We usually will prepare five whole wings at a time if it’s just the two of us.

My favorite part are the “flats” or the “clothes pins” and Christine prefers the drumettes and since she can’t eat as much I get some of each and nothing goes to waste at our house.

The trick to getting any fried food crisp is to start with a dry product.

After cutting the wings along the joint take a paper towel and squeeze each wing dry and then transfer to a bowl. We do this one wings at a time and go through several paper towels.

Next we make a mixture of ½ TBSP of garlic salt with 1 TBSP of baking powder—not soda. Sprinkle this mixture over the wings in the bowls and toss so they are evenly covered. Now let them stand for an hour or two at least—overnight is fine too.

Heat the cooking oil (we use peanut or canola) to 375. We’ll cook ½ of the wings at a time in the basket. Overcrowding any fried food will mean that all of the steam escaping is steaming your food not frying it crisp.

I’ll set the timer for four minutes and then pull out the wings, allow the oil to drip off and transfer these to a clean bowl with a paper towel in it. Once the fryer has recovered to the desired temperature cook the next batch and so forth until all batches are done.

You can let these rest for as long as you want really because the next step is to fry them once again at the same temperature but this time for only three minutes. We can afford to double the number of wings we cook in the basket the second time around since most of the moisture is already gone from the first frying. In this batch we’ll add some sliced chunks of jalapeno & Fresno peppers for added color, texture and flavor. Dip these in baking soda too and they’ll be crisp as well.

After these are done we served them with many different sauces but always on the side. Unless you are going to inhale all 12 wings in a minute or two they will begin to get soggy right away. Allowing your guests to dip their wings in whatever sauces you have allows for variety of tasty creations and a crisper wing.

Can you bake these rather than deep fry? Of course, they won’t get quiet as crisp but the same principle of removing the moisturize—that’s where the secret ingredient comes in—baking powder.