What was Served at the First Thanksgiving?

What was Served at the First Thanksgiving?

If you’re like us you might remember being taught the history of Thanksgiving as early as Kindergarten. But recalling those facts some 50 years later has escaped me. That led me to refresh my fading recollections with some interesting facts about the traditional feast. So before you sit down for that annual feast we now call Thanksgiving, only to fall fast asleep from overindulging in the intoxicating tryptophan from Turkey, here’s some of the back story trivia that might just serve to divert a heated political conversation, or a festering sibling rivalry.

The first “Thanksgiving” as we call it today lasted three days, with food festivities and celebration. Today, most families are content on convening for a few football games and a meal that takes five hours to prepare and fifteen minutes to consume.

There seems to be a lot of debate even amongst scholars as to whether or not Turkey was served at the first feast. If not, then what was served at the first Thanksgiving in 1621? The answer is simple—whatever they had in abundance. After all, they were inviting their guests, the Wampanoag tribe to help celebrate their first successful harvest in the New World and they ate whatever was available. 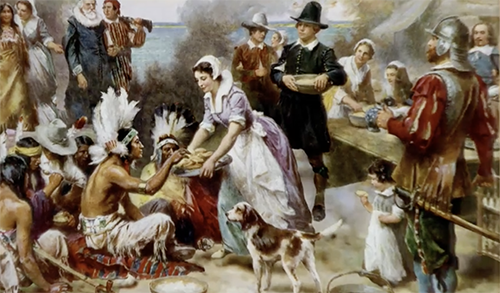 Stories go that the local visiting tribe brought Venison to the feast, clearly abundant at that time and a major staple of the indigenous people, so it’s reasonable to assume venison was probably on the menu. As was no doubt Lobster, clams and mussels as well as other seafood items, being so close to the Atlantic Ocean. Corn would have been out of season by then so it’s unlikely that fresh corn was served, but Flint corn, AKA, dried “Indian Corn” would have most likely made the cut. Other grains and nuts such as chestnuts were most likely there, Hogs were imported to the America’s in the 16th century so one of the proteins might have been Ham as well. But scholars disagree upon whether or not Turkey would have been served. It seems likely that while not the star of the show as it is today, a wild turkey or other foul would have made it to the feast, so we’re a little unsure about the skepticism on the part of some scholar’s, other than it makes for a good headline.

Potatoes first arrived in the Colonies in 1621 but the first permanent potato patches in North America weren’t established until 1719, so mashed, boiled, roasted or otherwise potatoes no doubt missed the festivities.

What about Pumpkin Pie? Probably not. Though winter squash no doubt was in attendance. Since sugarcane wasn’t imported until around until 1619, and the colonists couldn’t make it grow, it’s doubtful a pie was constructed though it is possible that a sweetened squash of some sort may have been served using molasses or maple syrup.

All this makes one ponder then why do we have all of these so common accoutrements surrounding this famous feast? As it turns out, the author of the poem, Mary Had a Little Lamb, Sara Josepha Hale, had quite a bit to do with it. Inspired by President Washington’s proclamation in 1789 as November 26th to be the First Thanksgiving Holiday, she lobbied aggressively for years from 1827-1863 to get a day of Thanksgiving recognized as a national holiday, when finally Abraham Lincoln got wind of her plea and used it to his advantage to inspire the country going through a civil war. In October of 1863 Lincoln pronounced that a day of Thanksgiving shall be celebrated on the final Thursday in the month of November. Why the last Thursday? Sara went on to write, “The last Thursday in November has these advantages — harvests of all kinds are gathered in — summer travelers have returned to their homes — the diseases that, during summer and early autumn, often afflict some portions of our country, have ceased, and all are prepared to enjoy a day of Thanksgiving.”

But it was Sara’s writings chronicling what should be including in the feast that jump started what today many Americans serve at the table including mashed potatoes, Turkey, stuffing and pumpkin pie.

What about the green beans? You can thank Campbell’s Soup Company for that one. They lobbied hard their recipe to push the sales of their mushroom soup.

But the last Thursday didn’t stick forever. President Franklin Roosevelt in 1939 changed it to one week earlier to allow for an additional week of shopping before Christmas and his timing wasn’t a coincidence—the country was in a middle of a depression.

Finally, in 1941 FDR moved it to the 4th Thursday in November where it has remained until today.

Why is a Turkey called a Turkey?

A popular theory arises from turkeys coming to England from the Americas via merchant ships from the Middle East where they were domesticated successfully. Again the importers lent the name to the bird: because these merchants were called “Turkey merchants” as much of the area was part of the Ottoman Empire. Hence the name “Turkey birds” or, soon thereafter, “turkeys”.