Mortgage rates returning back to near record-low levels in the first half of the year, coupled with an anticipated rise in the fed funds rate later this year, may also have prompted prospective buyers to feel a sense of urgency to enter the market. The statewide sales in July exceeded 400,000 for the fourth consecutive month, and July 2015 was the month with the highest sales level since Oct 2012. The strong momentum in the first half of 2015 elevated sales in the first seven months to 407,060 (seasonally adjusted and annualized), an increase of 7.1 percent when compared to the same period of last year. After reaching the peak in nearly eight years, the statewide median price in July dipped slightly to $488,260 from the previous month, but remained close to the recent high reached in June.

The median price continued to improve at a moderate rate from the previous year, with a year-over-year gain of 5.4 percent in July 2015. While the median price continued to improve from the previous year, the rate of increase has been decelerating steadily in the last twelve months. The combination of modest price appreciations and low interest rates kept housing affordability from declining further this year in most areas, despite higher prices. In fact, the statewide Housing Affordability Index (HAI) actually rose in the first quarter of this year to 34 percent before dropping back to 30 percent in the second quarter. 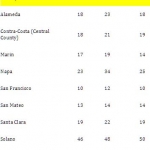 With the threat of interest rate hikes in the fourth quarter of 2015, housing affordability may become a bigger challenge for many potential home buyers, particularly for those who reside in high-cost areas such as the Bay Area. The California housing market should continue its momentum and have a solid performance throughout the rest of the year. Sales, however, could cool off slightly in the fall if mortgage rates gradually rise. With the economy growing faster and the labor market improving next year, more households will be formed as consumer confidence continues to rise. As a result, sales activity is expected to inch up in 2016. Inadequate supply in high-end areas such as the Bay Area is exerting upward pressure on prices, but home sales in those regions are simultaneously being constrained.

Drew & Christine Morgan are REALTORS/NOTARY PUBLIC in Belmont, CA. Each with more than 20 years experience in helping sellers and buyers in their community. They may be reached at (650) 508.1441.